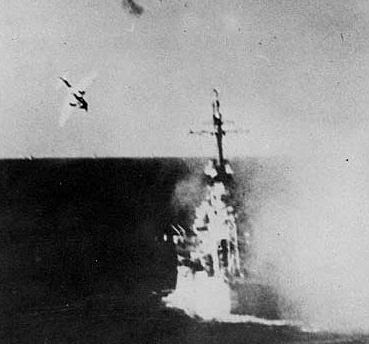 The sleek body of the dive bomber plunged, the arc of its wingspan and tremendous feedbacked screech cutting the air around it to ribbons. The ships below had arranged themselves as some kind of vast ocean sundial, a great tanker drifting in the middle.

Stewart followed the path of the plane, the great silver bullet; heard the shuddering crush beneath his mufflers and felt the watery reverberations. A confusion of footsteps tripped around him and tongues of flame reached from the stern of the ship tracing the northerly peak of the sundial. Rattles of gunfire cut up the water nearby, and Stewart was thrown, his cheek colliding with cold steel. When he looked up again, the sky was raining plane parts. The man on the mount was squatted in a lurching frenzy, swinging the 40mm., spitting staccato bursts as shadows around him hurled ammunition to each other.

Slapping a wet hand against the frame beside him, Stewart pulled himself up, staggering towards the mount and the hive of dark figures. There was supposed to be air coverage. Sound seemed to have condensed into one searing frequency – he wanted to scream at the needle eye flourishing through the spatter of bullets and slabs and parts, but the swell remained trapped at the gates of his teeth. The eye became a sick hole, became a seething plane head, and just as it seemed to fill everything there ever was, the wing was blown off.

Debris and gasoline sprays exploded over the mount and when Stewart scrambled up he found the gunman flat out, a chunk of motor obscuring his head. Shadows flitted within shadows, the cumulative shouts of the crowd on the deck returned again, and in the near distance breeding flames lit up the night as it sealed itself over the pocket of water and everything within it. Underneath the seal planes strafed ships, bombed ships, melded their bodies finally with that of the ship’s own.

Stewart pried the lump of motor away and the man’s face below it was flat, a kind of rubber pulp, sprays of red on either side.

The first thing he said was: ‘Do you have the Gaelic?’

John looked at his mother. The living room was a stretch of dusty cabinets, dusty shelves and faded green colours. Mr. Stewart was sunk deep in his armchair, as if it were slowly gestating around him.

‘He doesn’t,’ she said. ‘They learned a little in primary school, but not in high school.’

There was a pause. The old man’s head rolled back towards the television screen. His mother coughed, then laid a hand across his shoulder.

‘Well, Johnny, you do a good job for Mr. Stewart. I’ll see you for dinner at five.’ Her eyes pressed action of some kind, then she slipped out of the room. He heard the front door closing.

‘Do you want me to start in here?’ He asked, stepping closer.

‘Make sure not to touch the wallpaper,’ said Mr. Stewart.

The living room was really just dusting and hoovering. Mr. Stewart breathed heavily whilst John worked, shooting him the occasional suspicious glance. The hall, with its faintly fishy smell, led to the kitchen, and past that another hall shrouded in darkness. John was still fumbling for the lightswitch when he heard broken shuffling, wheezes, and a click. His small shadow was thrown up against the far wall of the room at the end of the hall. Small shelves, washed in slender light, lined the interior of this back room. They were stacked with rows of little stones.

‘Yes – yes, sir,’ nodded John. He moved into the room. Spraying a presentational jet of furniture polish on the first shelf to his right, he eyed the little rocks. They were smooth, polished lumps. Each one was painted, in delicate black letters, with a circle of Gaelic words. He turned the closest one to hand, bringing the duster up.

‘Don’t touch the wallpaper,’ drifted from down the hall.

On the fifth week of his once-a-week, two-hour cleaning sessions, Mr. Stewart sloped in brandishing a plate of sticky-looking boiled sweets.

‘A break,’ he muttered, thrusting the plate towards John. ‘Watch some TV, lad.’

The boy sank into the armchair. He placed the plate beside him, and reached for a sweet. They came away in his hand as one clinging block, which he abandoned with a clink. He watched the news for a while, then flicked through the channels. The clean autumn afternoon was trapped outside the blinds and the air was musty and laced with furniture polish. Dull green furniture swelled from ancient cream walls and felt part of some distant world. The History Channel was showing repeats of the Laurence Olivier-narrated ‘The World at War,’ and John settled into it, nursing his duster as grainy footage of Japanese kamikaze planes tearing above ships in a sprawl of black ocean played out.

The familiar broken shuffling mingled with the tinned gunfire and an extremely milky cup of tea was jangled into place beside him. Mr. Stewart wheezed as he rose, glancing at the screen.

‘They were a nightmare to shoot down,’ he muttered as he traipsed out.

The light in the back room always seemed cowed; John moved in half-shades, spraying and buffing the stones, aligning them carefully, looking at the strange, circular words.

‘You don’t have the Gaelic,’ piped Mr. Stewart. John slid his head out the door. He could see him down the hall; he was sitting on the floor pulling his shoes on, the way a child does. He watched the old man reach to struggle with the laces.

‘That’s ignorant,’ coughed Mr. Stewart, leaning against the wall to prise himself up.

Amidst shifting sheets feathered with dust and shrapnel and wreckage and bodies the ship floated, inside and outside of time. The night sky cocooned them and their festering slip of water. As Stewart traversed the deck he found parts of machinery and parts of German pilots; hands, feet, and once, glued to a curved hunk of glass, a scalp.

They gathered the pieces and threw them overboard; fragments of planes and fragments of people. The husks melted into the black envelope bobbing beneath them and Stewart fancied he was detaching his own framework piece by piece and casting it into the void fingernail by liver by tongue until a sliver of wretched sinew remained, coiling in nooses around his soul and below, the bobbing torsos, heads and eyes struggled to catch a glimpse –

The ship pulled into Scapa Flow three days later. The men trooped out, tired and forlorn. Several of them turned to look down at the grey spread of beach; they saw Stewart scrabbling around, filling his bag with stones.

On the tenth week, the bulb in the back room died. John twisted as a hiss of furniture polish died around him. Down the hall, the kitchen light sparked on and John stood whilst his eyes adjusted to the semi-darkness. The stones lay in neat rows, black lumps hewn from black, and it felt like he was seeing them for the first time. He could hear the rhythmic shuffle approaching and when he turned the shadows wrapped and embraced and he thought, for a split second, that a man with an entirely flat face – a kind of rubber pulp-mask – was approaching him.

– They were a nightmare to shoot down –

The face gained roundness and shape as it moved forward; it was strained and tired and John saw past to the green furniture, the cream walls, the sticky sweets and for the most minuscule of moments, a promontory of experience that existed so far beyond what anyone was capable of conceiving of; he leaned against the wall and Mr. Stewart flicked the hall light on.

‘Don’t touch the wallpaper!’ He said.

John started. Mr. Stewart fumbled against the middle shelf and patted along to the third stone from the left, grasping and bringing it over to him. Then, grumbling about fetching a new bulb, he slouched off.

In sleeves of light by the blinds, John turned the stone over in his hand. A circle of small black letters read:

(as long as sea beats on stone)